We are continuously exposed to certain limits

Slovakia’s SND International Theatre Festival, Eurokontext, is always marked with a theme that reflects the current social and political situation while connecting the individual performances in the programme. For example, past themes (in translation from Slovak) were ‘Walls’ and ‘Civilisation threatens civilisation’. In 2019, the SND chose ‘Limits’.

“When looking for a topic, we realised that all across Europe we are bothered by continuously being exposed to certain limits. Democracy has its limits, capitalism has its limits, the consumer lifestyle has its limits. This topic seemed interesting to us,” explains Michal Vajdička, director of the SND Drama Company. Therefore, we decided to use photos from the protests on our posters, because the protests point to the border situations that our society has encountered.

Protests serve as a borderline opportunity in a democratic society to express dissent about the current development of the social situation all over the world. This is a strong theme in which we wanted to illustrate the main message of the festival. So we decided that the posters would include photos from various civic protests in Europe.

The idea was to use a photo from the protests in every participating country. What was happening in the image could easily be recognised in the details, rather than showing banners with political messages. However, the then-management of the SND decided to stop the production of the posters in the interest of protecting the political independence of the SND.

“The order of the Director General of the SND, which has been in force for several years, states that in the interest of the SND’s political independence, the use of its premises and any publicity about the institution’s artistic production for presenting political parties and political movements or other activities, is not allowed.”

The SND leadership believed that the photos from the protests were “of a political nature, as the posters contained footage and slogans from the demonstrations, not only in Slovakia but also in other countries,” wrote the SND.
Due to this discrepancy, we agreed with the head of the SND Drama Company on the use of blank visuals. These also illustrated the limits we encountered during the promotion of the festival. The blank images visually demonstrated the entire year of Eurokontext drama. 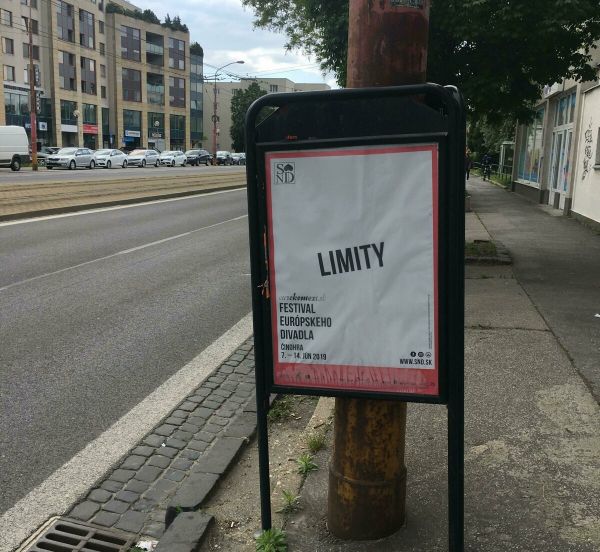